Fr Richard Wall, The Tenth Rector of our sister parish St Paul’s K-Street in Washington DC, is to visit and preach on Sunday 10th April 2016 at 11:00. 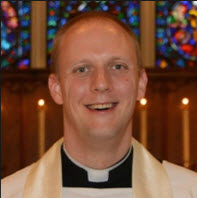 Recently appointed the Rector of our sister parish, Father Wall hails from St. Andrew’s, State College, in the Diocese of Central Pennsylvania, where he had served as Rector for almost six years. Fr. Wall was born in South Staffordshire, England. He did his undergraduate and seminary work at Oxford, studying at Christ Church and St. Stephen’s House, respectively. Sponsored for ordination by the Diocese of Liverpool, he was ordained in Chelmsford Cathedral in 2002, and served as Curate for almost three years in commuter-belt Essex. On Valentine’s Day 2005, Fr. Wall “crossed the pond” in response to a call from St. Clement’s, Philadelphia, where he served as Curate for four and a half years. Fr. Wall is now a naturalized citizen of the United States.

Please join us to welcome him and to hear him preach on Sunday 10th April at 11am.