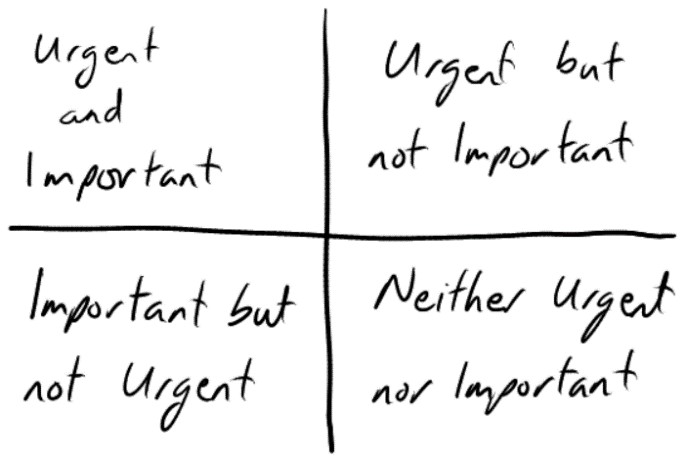 A clergy colleague of mine in a previous job had the floor of his study divided into four quadrants by means of a big cross of gaffer-tape stuck to the floor. Four squares, with his desk in the middle. He was one of those people who ‘filed’ things in piles, never quite getting as far as populating his filing cabinets, and he’d elaborated a clever system for reminding himself which things he ought to be looking at.  For many months I simply put the cross on the floor down to eccentricity, but eventually my curiosity got the better of me; “What is it ‘for’?”, I asked, “how does it work?”

He explained to me that on one side of the cross on his study floor, on the right of the horizontal line was ‘urgency’. Some things which arrived in the post or the internal mail (or by emails, which he printed out) were urgent; they needed to be dealt with quickly because they had a time-limit on them. When these arrived, he’d place them above the line. Things below it he’d ‘get round to’ when he had time – but they weren’t classified as urgent.

“Ah, I see,” I said, slightly bewildered that the cross was necessary. “And what about the vertical axis?”

“That means,”I said, suddenly realising what he was doing, “that some things are urgent but not important, while others are important but not urgent!” “Yes,” he continued, “and I always find myself prioritising the things that are urgent. It’s silly, because the urgency is often created by other people. What I should be giving my time to is the stuff that is important.”

He’d learned that it was important to deal with the top left hand corner first, and then, instead of moving to the right, instead to move down… And only when the important but not urgent things were done, to turn to the urgent but unimportant things. “And the bottom right corner?” I asked. “Oh, that’s the wastepaper bin! Why would you spend time on things that are neither urgent nor important??!”

It’s a good exercise for us to undertake this summer. How do we choose to use the time and energy God has given us in creation? Often, I fear, chasing apparent urgency at the cost of accomplishing things that might be really important for us, and for others.