2. What are the O Antiphons?

Watch the film on YouTube:
O – The O Antiphons – What Are The Antiphons?

We began with a seminar, led by the Ven Nick Mercer, who explained what the O Antiphons are. The Ven Nick prepared a paper, which is referred to in the film and which you may like to print off to have while watching. 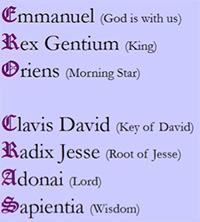